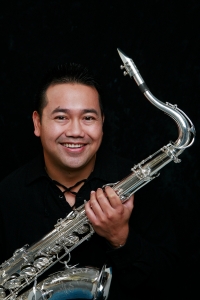 PAUL NAVIDAD is an award-winning saxophonist, pianist, composer, and arranger.  A native Southern Californian, Paul has amassed a wealth of credits as a musician, vocalist, radio personality, voice-over artist, and actor.

From 1980 to 1985, he was a member of the internationally-acclaimed All-American Boys Chorus with whom he toured the western United States and Canada four consecutive years.  He is also a featured vocal soloist on the Chorus’ first Christmas album, A Little Christmas Magic. While still in junior high school, Paul began composing and arranging.  Deciding to concentrate on instrumental pursuits, he went on to minor in music at the University of California, Irvine and later received his Master of Music Degree with a concentration in Saxophone Performance/Jazz Studies from California State University, Long Beach.  He has received additonal private training under the tutelage of John Barcellona, H. David Caffey, Buddy Collette, Richard Dastrup, Tom Kubis, Eric Marienthal, James Newton, Leo Potts, John Prince, Dan St. Marseille, Walt Weiskopf and Albert Wing. 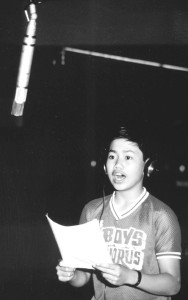 In January of 1997, Paul was honored by Rico International with one of only three full scholarships to West Coast Jazz Saxophone Conclave I.  There he had the opportunity to attend masterclasses by Pete Christlieb, Buddy Collette, Bruce Eskovitz, Brandon Fields, Charles Lloyd, Dr. Thom Mason, Kim Richmond, and Herman Riley.  In April of 1997, Paul had the distinct honor of being the featured soprano saxophone soloist with the American Jazz Philharmonic, under the direction of Jack Elliott, in their performance of Alan Broadbent’s Conversation Piece.  He later received an outstanding soloist citation from the International Association of Jazz Educators (IAJE) and was inducted into the national music honor society of Pi Kappa Lambda.  In January of 1998, Paul was again honored with a scholarship to West Coast Jazz Saxophone Conclave II.

Paul’s television appearances include locally 2 with You, PM Magazine, The Marta Lee Show, Soundtracs, and the KTLA Morning News, as well as nationally on The Hour of Power, Epcot’s America, America, and in a commercial for CBS’ The Wizard.  In August of 1995, he received critical acclaim for his saxophone work in the West Coast premiere of Carole King’s Tapestry.

Paul has performed at such noted Los Angeles area jazz clubs as The Atlas Bar & Grill, The Baked Potato, Catalina Bar & Grill, Cavallino, Kikuya, Lunaria, Randell’s, Rocco, Spaghettini, Steamer’s, Studio Cafe, as well as Jazz on Top in Osaka, Japan, and the world-famous Blue Note in New York City.  He has also performed at a number of concert venues in Southern California including the House of Blues, Club Caprice (formerly the Strand), the Coach House, the Galaxy Theater, the Thornton Winery, the Ventura Theater, the Belly Up, the Canyon, and the Verizon Amphitheater, as well as at Lincoln Center in New York City.

In addition to his voluminous work as a sideman, Paul leads his own big band, jazz quintet, and fusion band (Revenge of the Sidemen), and is a member of smooth jazz keyboardist Patrick Bradley’s band.  Since 2000, he has been a member of the faculty of Orange Coast College in Costa Mesa, California, where he oversees both the Jazz & Commercial Music Studies and Music Theory programs.  Paul’s recording credits of note include Lou Rawls’ final album Lou Rawls: Christmas, Buena Vista Records’ A World of Happiness, the soundtrack to NBC’s emmy-nominated sitcom Friends, and the soundtracks to the feature films The 100 Mile Rule and Player 5150.  In August of 2010, Paul released his debut single as a vocalist entitled “I Won’t Let You Down,” now available on both iTunes and Amazon.com.